Flying in 2016? You Won't Need a Passport For Domestic Flights 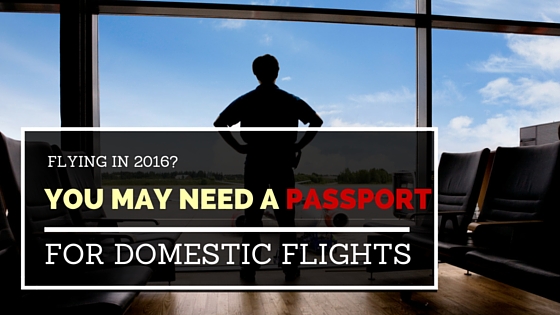 UPDATE: No passports needed for domestic flights…for now. The Department of Homeland Security has announced they will not start enforcing REAL ID at airports until January 2018.

A passport for domestic flights? In 2016, your driver’s license may not cut it at the airport. Read on to find out why and what you can do about it.

In 2005, Congress passed the REAL ID Act. In response to the 9/11 attacks, the REAL ID Act laid out the security standards that state driver’s licenses and IDs would have to meet to be accepted for air travel. If you live in a REAL ID-compliant state, you probably noticed that you had to bring additional documents last time you renewed your driver’s license.

But not all states are compliant. In fact, several states have been playing a game of chicken with the Federal government over the law. At the original 2010 deadline, at least 26 states were out of compliance. So, the TSA issued an extension. They extended the deadline again in 2013.

Now, the extended 2016 deadline is looming. 28 states are still out of compliance. At this point, the TSA has granted extensions to all but Minnesota. However, depending on the state, those extensions will run out in January, June or October of next year.

REAL ID: Is Your State Compliant?

The following states are currently compliant with the REAL ID Act:

Is your state not on the list?  The map on this page will tell you if it has been granted an extension, and for how long.

But don’t panic. Even if you’re in Minnesota, you have some time before you’ll actually need a passport for domestic flights.  According to Marketwatch, DHS will let everyone know at least 120 days before they plan to begin enforcing the law. Even then, there will be an additional three-month grace period. During this time, you’ll get a little lecture at the airport but you will still be allowed on the flight.

Will You Need a Passport for Domestic Flights Next Year?

Not all states issue enhanced driver’s licenses. Other acceptable documents include:

Using a passport for domestic flights is the most practical option for most people.

What do you need to get a passport? It depends. Are you applying for a new one? Renewing an old one? Applying for a child passport? These articles break down the requirements for each:

How to Get a New Passport

How to Apply for a Passport Renewal

How to Get a Child Passport

Plan ahead- if you don’t have a compliant ID and you have a trip planned, apply for a passport well ahead of time. Processing can take 4 to 6 weeks for regular processing and 3 weeks for expedited processing from the post office.

If you need a passport more quickly, you can make an appointment at the nearest Regional Passport Agency, or RushMyPassport can submit your application for you for an additional fee. In both cases, your application can be processed in as little as one business day. Expediting companies like RushMyPassport help you with the application, help catch and correct mistakes and provide super fast processing with no need to travel to an agency or wait in line.