How Safe Is Your US Passport? 3 Rules to Follow 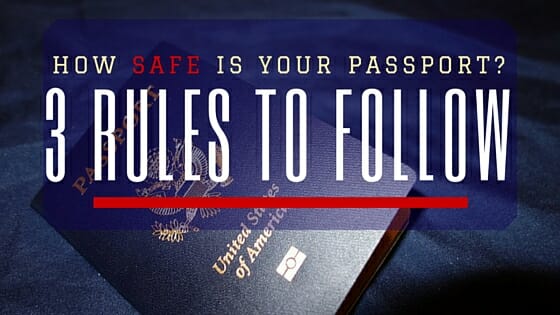 How safe is your US passport? The US has one of the most powerful passports in the world. As a result, it’s also one of the most sought-after by criminals.  These 3 rules will help you protect your passport from thieves when you travel.

Rule #1: Three Places to NEVER Leave Your US Passport

Protecting your passport means keeping it somewhere defensible. NEVER  leave it in any of these places:

Passport thieves are professionals. They don’t act randomly. They have a set of procedures they follow to maximize their chances of getting away with your passport.  The UK government released a video starring “honest pickpocket” James Freedman that demonstrates four of the most common tactics used by  thieves to steal your passport. Watch the video to see the following “passport hustles” in action:

Also, the Daily Mail warns readers to be wary at airport security. One common trick:  After you send your personal items through the X-Ray machine, a thief cuts in front of you having conveniently “forgotten” to take his keys out of his pocket.  The result? You’re separated from your valuables just long enough for his accomplice to rob you blind.

Where should you keep your US passport when you travel? Of course you need to carry your passport while you’re in transit, but what about when you arrive at your destination? Some experts say it’s best to leave it locked in a hotel safe. Others say to keep it with you at all times. Consider the hotel’s reputation and your plans for the day before you decide.

When you’re out and about with it, the best place to keep your passport is the on a passport holder around your neck, under your clothes. Pretend it’s the one ring, and you’re Frodo Baggins.

How to Replace a Lost or Stolen Passport

Although only a small percentage of Americans report their passport lost or stolen each year, you don’t want to be one of the unlucky ones.  Still, these things happen even with the best of precautions. Here’s what to do if it happens to you.

If you’ve lost your passport in another country, go directly to the closest US Embassy for help.

If you’ve lost your passport in the US, apply for a replacement in person at a passport office. Find out what you’ll need here.

In the US, replacing a lost or stolen passport can take six weeks for normal service. If you expedite at a post office, it will take two to three weeks. For faster service, make an appointment at the nearest passport agency office. Many people have trouble making it to a passport agency due to distance and time constraints. So, a more convenient option is to use a passport expediting service like RushMyPassport.