Can You Buy Beer with a Passport? 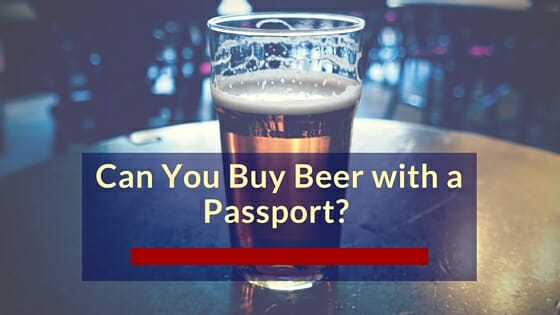 Can you buy beer with a passport?  A passport is a federally-issued picture ID. It shows your birthdate. So it should be fine to use, right?

In theory, yes.  In practice, it depends.

Where Can You Buy Beer With A Passport?

The drinking age is 21 in every state. That said, ID requirements vary from state to state and even from store to store.   Most states do allow passports to be used as ID when buying alcohol. However, these laws don’t necessarily require passports be accepted. For example, in Maryland:

Maryland state law does not require counties to accept passports and different counties have different policies…State law states only that businesses “may accept” driver’s license, identification card or a military ID card.

Even in areas where passports have been explicitly deemed acceptable, individual stores may not accept them.

That seems foolish, since it’s generally harder to get a passport than it is to get a driver’s license. However, more people use driver’s licenses than use passports. Clerks see more driver’s licenses, they know what they are supposed to look like, and they are better able to spot fake IDs. In some states, even accidentally selling alcohol to a minor comes with catastrophic consequences for the business and the clerk, so they prefer to play it safe.

Passport card holders, beware: Some places will accept a full passport book as ID but won’t take a passport card.

Some Establishments Prefer a Passport

That said, if you’re traveling out-of-state and plan to drink, you might want to bring your passport as a backup ID.  Just as some establishments won’t accept passports, some won’t accept out-of-state licenses. For example,  according to the Albuquerque Journal, some New Mexico restaurants refuse to accept out of state driver’s licenses:

A recent example comes from Pam Parker, who emails “my 29-year-old daughter-in-law could not buy a sangria with dinner at (a local New Mexican restaurant on a) Friday night because South Carolina issues vertical driver’s licenses. (New Mexico issues vertical license to those under the legal drinking age of 21). They also refused a Texas license at another table. Their solution? Bring a passport. Really. With people coming from all over the world for Balloon Fiesta, you would think establishments would make an effort to read the dates on out-of-state licenses rather than refuse them all.”

In a similar vein, Boston’s TD Garden arena only accepts out-of-state licenses from patrons older than 25.

If you’d like to go out and drink using your passport as ID, your best bet is to call the establishment first and confirm that they will accept it!

What to Do if Your Passport is Refused

If your passport is refused, you can always ask to speak to the manager. But be nice about it. Remember, in most states stores are free to make their own policies that can be more strict than state law. They don’t have to sell you alcohol even if you are old enough to legally buy it. Also, check your passport expiration date, and remember that expired passports may be considered unacceptable.

If you need to renew your passport, here’s a rundown of what you’ll need. And if you’re in a hurry, remember that RushMyPassport can get your passport application processed in as little as one business day, with no need to visit a passport office.

Ready to renew? Get started with our easy order process!

Have you tried to use your passport to buy alcohol? What happened? Let us know in the comments!